Voting is a popular activity in our world today. From the beginning of human kinds, whenever a group of people needs to reach an agreement, we as social animals usually choose to collect the choice of all the people in that group. A fair, uncheated result is undoubtedly everyone’s desire. However, if we rely on a voting counting agency, a manipulated result is unavoidable. This is not a perfect world, sometimes people will behave badly for any kind of reason. Our modern world allows us to digitize voting activity, a voting system, which if works correctly, is much more trustworthy. Still, these voting systems are controlled by men or some organizations, to which they have full access. Therefore, the result could be twisted. Voter, a person who voted, sometimes can’t realize this situation or fail to prove.

Blockchain provides us a platform to build a transparent, immutable application. Ethereum successfully proves how the digital voting system can fit perfectly into Blockchain technology. A lot of voting applications have been built since then. All votes would be recorded publicly in Blockchain and counted by an algorithm, which everyone has the right to access. Blockchain with its immutable ledger gives us confidence in the final result. However, transparency also means publicity. Your choice can be exposed if there is a link between your address and real-world identity.

What if voters want to hide their identity, but still get an accurate final result? Ethereum and many other Blockchain will only reveal your virtual identity (address), not your real-world identity. This relationship can be linked easily via some kind of attack or in an authorized voting pool, in which voters must bind the address with a real-world identity. Despite Ethereum’s wonderful properties, the voting application needs Blockchain with privacy mode. This is where Incognito Chain comes into handy. Incognito Chain could provide a transparent, trustworthy, and private voting application.

Incognito chain allows us to create new privacy tokens and these tokens can be transacted privately. Leveraged by these features, the voting system will possess a transparent voting mechanism, while hiding the voter’s choice.

Our core business logic and data will be on Incognito Chain. Voting application only holds data for quick access and provides a better UX.

Two voting poll at current time, one is still opened other is closed 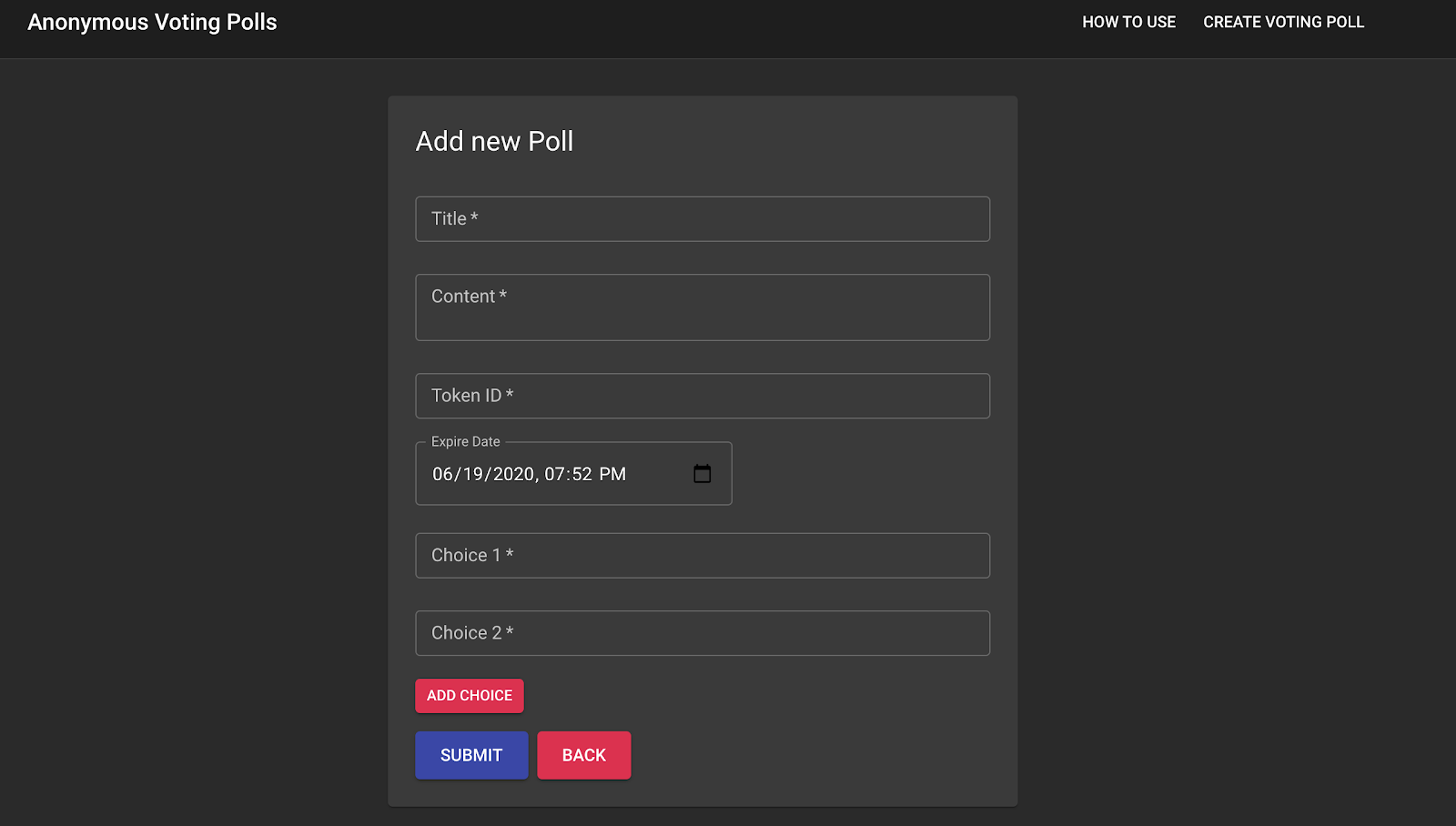 Title: What color is better?

Content (Description): This question is about your favorite color

D. Scan QR code to vote for a option

This is the Payment Address and its QR code from the “red” option. Scan and send a token to it. 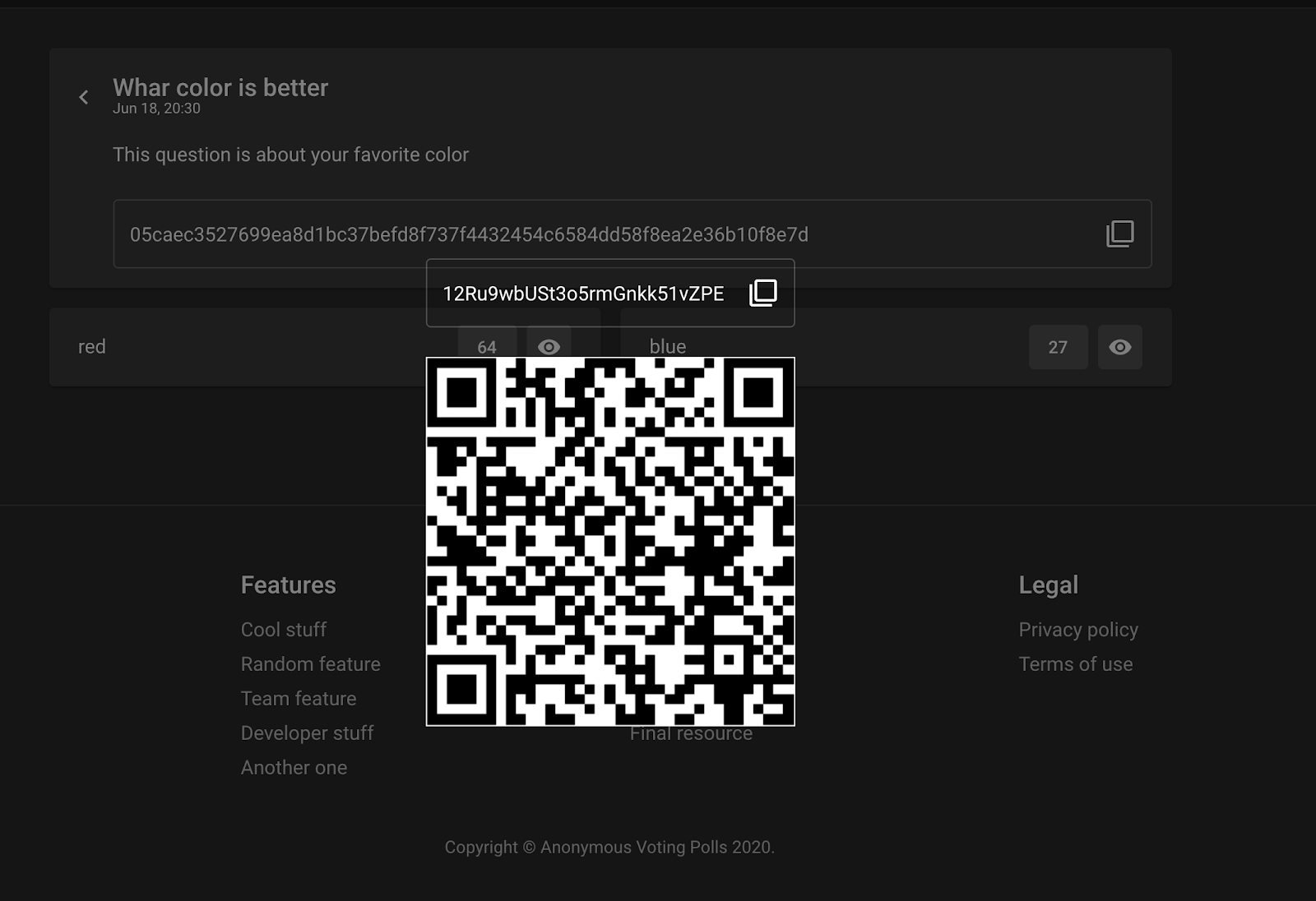 The first version is expected to be release next week, 24 Jun 2020 for Builder Reward Program. We will send out a detailed tutorial about using Anonymous Voting System when it is released.

I am Hung Ngo from Incognito Core Team, but i joined this project as a Community Member. I really love Anonymous Voting and Incognito Chain have a wonderful platform.
Thanks @ning @annie for your great support also other member of the team. Also many thanks to @altair (the great eagle) for your faucet app, without your application things would be much harder for me.

Hey guys, I am desperate for your feedback about everything, ideas, working flow, UI/UX. Please give me a hand

Great idea!
My favorite colors are Red, blue, and black. All these colors of our project!
We will change this world for the better together! We will build a new world!

It would be awesome if the app allowed you to click on one of the choices and it gave more information, not just the QR code… For instance with the Builder Awards, I am not sure the difference between Ecosystem Tools and Network Explorer… If when the QR code was shown, there was a url to the product post on forum, that would be helpful to know which each specific project are (as we may not use all of them and may not be familiar with each of them).

Would be also cool to see how many % of people voted already.

Is the times shown in the app local time? System time?

I like the idea. However even if we could get the total issued vote, it doesn’t reflect the number of distributed vote. It’s based on the issuer. They could just issue 10,000 votes and only distribute 1,000 votes.