In the past 4 months since the launch of the mainnet, Incognito has kept busy and achieved a great deal. The founding team shipped a universal privacy blockchain, a plug and play physical node, a privacy-protecting wallet, a trustless bridge to Ethereum, and the first privacy-protecting DEX. However, sub-par communication with the community resulted in the project suffering from a perceived lack of transparency, leading to confusion and disharmony among those invested in its success. This disjunct was exacerbated by the misconception that Incognito is a company with customers and a brochure of shiny things to sell. The original concept of Incognito as an open-source project – kickstarted by the first community members and eventually run autonomously by contributors – had been muddled.

What is the solution?

Following the structures and principles pioneered by Linux and Wikipedia, Incognito implements the Bazaar development model. Incognito.org is where work is done, as well as the interface for the work that is done. The product is the conversation. The project is the community. Development is not restricted to just the founding team. Anyone can have a good idea, anyone can build it. Anyone can fund it, and everyone now owns a share of it. In this open model, idea generation, fundraising, development and decision making are public, dynamic, and ever-evolving.

Which solutions do people resort to because this doesn’t exist yet?

Currently, users are invited to contribute to Github and browse the code, but this isn’t very user-friendly. Many opt to leave suggestions and feedback on telegram instead, which is untidy and often unproductive. Explainers, documents and the most up to date information are free-floating and difficult to find – for both new and old users.

I’m Ning from the core dev team. I do a whole bunch of ad-hoc stuff. For this project, I’m helping to pull the first bits of content together and set the initial structures for the conversation to develop more organically. You’ll have seen my work for Incognito on the old site, the old blog, etc.

Why do you care?

If privacy belongs to the people, it cannot be developed in a vacuum. Everyone should be able to contribute to the privacy conversation and own a piece of the privacy movement.

Is there an existing conversation around this idea?

Development is already being documented: check out Proposals to see what’s cooking. The first Wanted tasks have also been completed and funded.

Is there anything else you would like the community to know?

We don’t know what will work yet, and I’m sure better structures will emerge organically as the conversation continues to pick up. If you have any ideas on how to better organize categories, tags, funding, etc. – please let me know!

March funding will be on a per week basis. Keep posting updates.

Big dip over the weekend, but that’s to be expected – happy to see at least some of us are going outdoors and having lives!

Averaging around 3400 daily page views so far this month. Have filtered out all core dev team activity as that will skew the numbers. For reference purposes, incognito.org averaged just 10% of that in the month of January (approx. 350).

Of course, part of this increase is down to consolidating views from places like the blog and telegram, but it does seem the new format is doing a good job at drawing people in and keeping them around. The growth team is also doing a considerable amount of outreach to Monero, Bitcoin and other validator communities, so shouldn’t discount that. Great job @henry @andrey @annie!

Have a great week ahead everyone

Much the same this week. Bit of a spike when community rewards launched, and a bit of a dip on Friday the 13th when everything else dipped.

Hey @ning do we still track progress on it ?

so, numbers are pretty consistent - stagnating a little. need to up it! 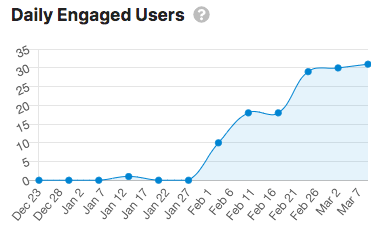 Coming along nicely, but lots of room for improvement!

this is really cool @ning. we get a much better visibility into the engagement on the site. as far as getting the numbers up… in my opinion, i would ignore them. i would just focus on helping everyone to create good contents and have good conversations. the numbers will take care of itself.

Since we’re wrapping up March, I wanted to take a closer look at not just pageviews, but also types of visitors, trends, and engagement.

On my end, here are pageviews from the last 3 days. This chart shows activity from registered users vs. anonymous visitors (people who visit the site without an account/without logging in).

The number of anonymous/casual visitors is rapidly increasing, so kudos to everyone working on exposure

As someone who made the first lonely post on this site, this blows my mind: 2,573 topics and posts made since Februrary.

Including both registered and anonymous users, we exceeded our goal of 4,000 daily pageviews (both Google analytics and Discourse analytics). Feeling pretty good about April.

Invite your friends to come hang out, and let’s keep the conversation going!

Completed! Moving this to the archive.

Part 2: getting more out of those pageviews!

Let me know what you think: Increase engagement on incognito.org