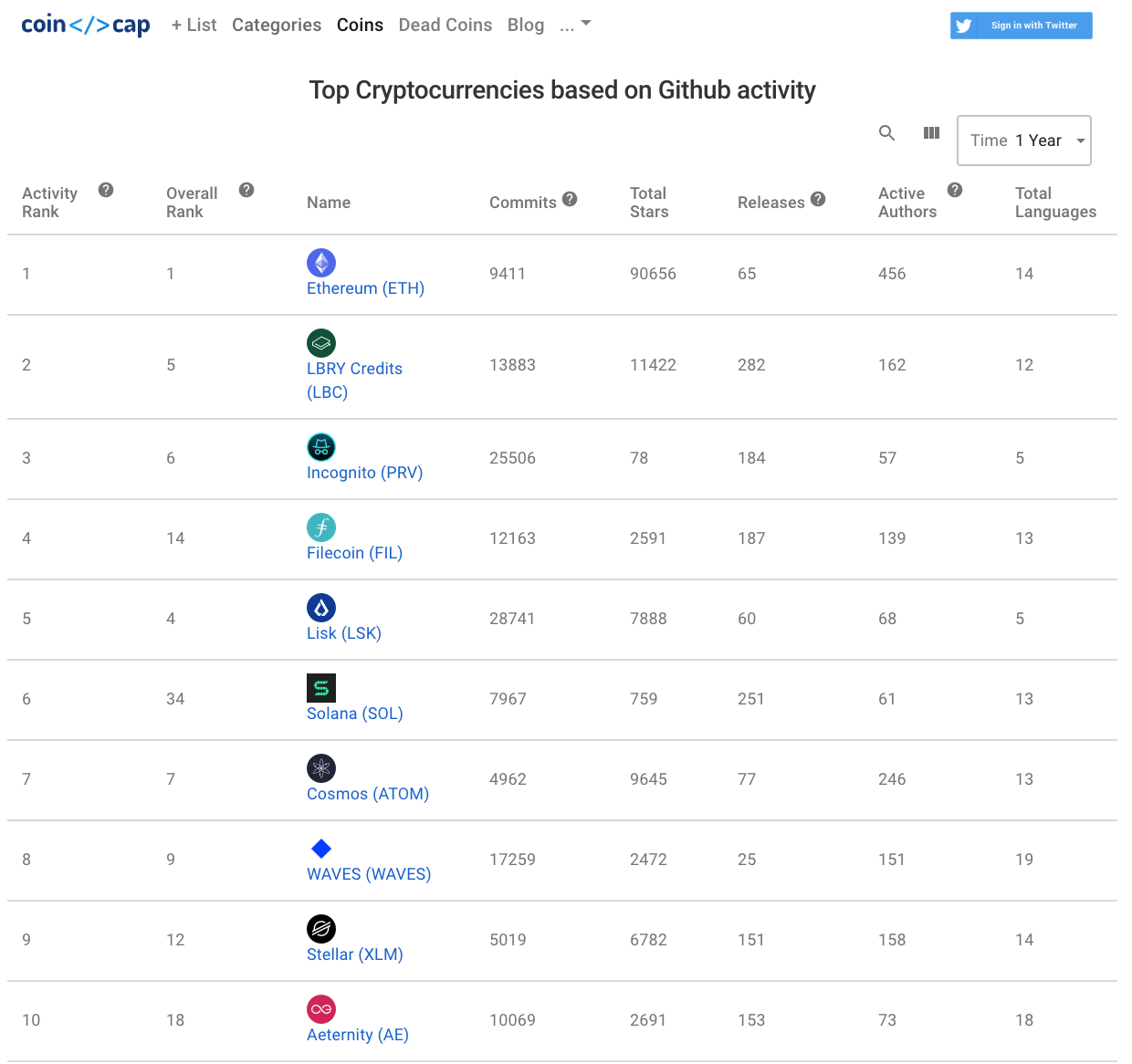 March 18th, 2020 - Today marks a big milestone in the campaign for global personal privacy. The incredible developments that the Incognito community has made in the past year have branded us as one of the top cryptocurrencies in the world, according to coincodecap.com.

CoinCodeCap reviews blockchain and cryptocurrency projects based on the various data that can be synthesized from Github. Today, they added Incognito to the vast list of projects they track, and aggregated the data from the Incognito Github repository. As a result, Incognito was ranked according to their algorithms here, and the results were incredibly rewarding.

As you can see from the above screenshot of the coins list, Incognito’s “Activity Rank” is 3 and its “Overall Rank” is 6, when taking into account data from the past year to date. Let’s break down exactly what this means, and how it’s calculated:

It should be no surprise that the Activity Rank is determined strictly by the project’s quantitative Github activity. According to CoinCodeCap, the activity rank is based on the “number of commits, active authors, and code releases” a project has. In other words, the higher the amount of active contributors and coding developments made, the higher the Activity Rank.

Incognito’s top-three standing is a testament to the more than 1.4 million lines of code written toward the project, and At 25,506 commits (and even more now), Incognito beats out Ethereum and LBRY Credits. The 185 releases and 58 active authors are similarly impressive.

Here’s a visualization of the development of the Incognito Chain:

As it weighs multiple additional factors, the Overall Rank is a much more competitive ranking category that is difficult to place in. That doesn’t seem to be a problem for the Incognito Community, though, with a ranking of 6. CoinCodeCap states that the Overall Rank is calculated based on “multiple data points, such as commits, forks, stars, watchers, etc.”

Context paints an even brighter picture

Looking at the data presented, one can see that Incognito keeps pace with or exceeds the performance of giants like Ethereum and Bitcoin in every area except stars. On Github, stars are a tool by which users mark a project as one that they like and want to keep track of. It’s similar to a “favorite” button.

Because Incognito is a young project with a few thousand dedicated users, the pool of users who are familiar with Incognito enough to star it on Github is extremely low. This means that, as the awareness of Incognito continues to grow rapidly, its rank will continue to rise to number 1.

Data - a part of the whole

While this rank milestone is a wonderful encouragement to those developing Incognito, it’s only one part of a much larger whole. The data simply supports what’s been true from the start; that Incognito is a dedicated community working their asses off to power privacy for all.

As every aspect of the project improves by the hour, from technical features to UI to general awareness, we can expect to see even greater things in the very near future.

To see more of Incognito in action, follow us on github: https://github.com/incognitochain

And don’t forget to read our whitepaper if you haven’t already.

Congrats for the team!!!