XMR users, what else should we build for privacy-aware crypto people?

Hi guys. Jason here. A new topic for discussion is brought up by me today:

What should we do/build to attract Monero holders and help them use the Incognito network more?

It seems to be a valid question at the moment because, since April, there have been influxes of XMR users into Incognito. The proposal for attracting Monero users to join our network last month is bringing positive influences and now we are witnessing this nice growth in XMR shield volume.

Privacy activities Monero users can do with their XMR

1. The experiment: Multiply your XMR by adding it to the Incognito DEX

The experiment borrows the concept from the DeFi products Uniswap & Compound on Ethereum and adds privacy, to create the first DeFi for Monero. You add liquidity for the PRV <> XMR pair on Incognito DEX (pDEX) and earn the interest of 62.7% APR on PRV and 10% APR on XMR, which is equal to the interest of ~ 35% APR on XMR only at the current rate. 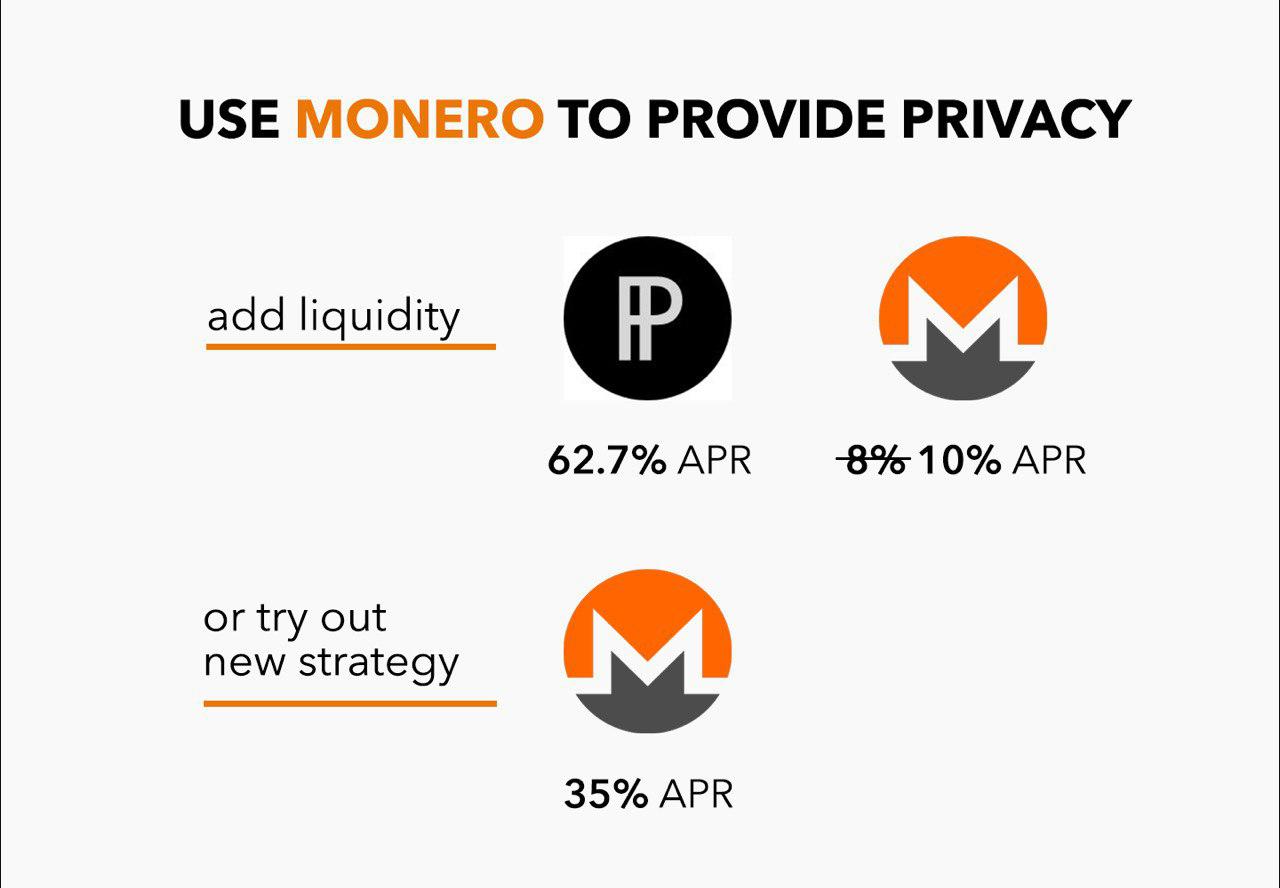 It’s such a good way to both provide privacy with your XMR and multiply your XMR at the same time.

We posted it on the Monero Reddit page and XMR users joined to discuss actively.

In the Incognito DEX, XMR users can privately trade XMR <> other cryptos back and forth with the large liquidity pools. The list of trading pairs includes:

Use PRV as the middleman to trade and no one can track your trading activity. Trading XMR privately is the advantage the Incognito DEX offers that you would hardly find in other trading platforms.

Read more on it in the discussion we have with XMR users on the Monero Reddit page.

PRV provides you the ability to buy any crypto privately, including XMR. The only thing you need to do is to have some PRV upfront, head to the DEX and trade PRV to pXMR. No one can know if you have bought any, or even how many XMR have you bought privately.

What I have recognized when e-talking with XMR users is that they are the most privacy-aware crypto users; they understand the privacy problems Incognito is working on right away and are willing to try out XMR-related features in the app. So, in this piece, I hope to get feedback from you guys, the XMR users who joined the Incognito network from the Monero community.

How have your experiences with Incognito been so far and which other privacy features should we prioritize building to serve XMR users? It would be very cool to hear some real thoughts from XMR users here

Well, I was going to try to develop this myself, but i’m a newb at smart contracts and I don’t know the ins and outs of the Incognito network.
But this idea is very relevant to XMR users and privacy conscientious people in general.

I propose we create an Escrow pContract. People should have the ability to send pCoins (of anytype) in to a contract wallet. Nobody is able to access the pCoins in that contract, unless both parties agree where the money should go. I already have the basic logic outlined in a text document.
The contract shouldn’t be allowed to send pCoins to any wallet except the ones defined on contract creation. If you wanted, you could add a moderation feature, where third party accounts can moderate the transfer, they wouldn’t be able to know how much money is being transferred, but they get a small fee for moderating the transaction.

Websites would just need to be able to integrate it into their services, or you know, whoever wants to use it. Should be simple to use and also available on the app.

People who pay for things on online markets with XMR would love an escrow service. You wouldn’t be limited to just using XMR anymore, but any pCoin. I believe i’m correct in thinking that pCoins use ring signatures just like XMR.

I even tried to get help here to create it.

Hi @Revolve. Love your idea of a p-Smart Contract on top of Incognito network. Can’t imagine how it would affect the escrow-based services but I bet it would be tremendous.

The devs team is actually working on it: Incognito mode for smart contracts and dapps. It would be great if you can join the thread and pour your thoughts in.

Will there be a Pnode sale for xmr owners? As was for DAI?

XMR has a exchange called xmr.to,
It seems blocked in the U.S.
However, it allows you to transfer XMR -> All the major Cryptos. USDT, ETH, LTC, BTC, DASH, etc…
It is only single direction, meaning you cant trade back to XMR from other coins.

Though I have found two exchanges that may go both ways. I haven’t looked to much into them, but I didn’t see any KYC requirement. It seems like you are able to swap coins including Monero with no personal info.

The more options in regards to exchanges, I think the better.

Haha, I also thought of the same thing in May @oppo. We have so many XMR users in our network now. I guess that the outcome of the ‘XMR promo’, if it’s launched, would be very good. Just let us think more about it cc @annie

I’ve used them often in the past and had no issues, only thing you have to remember is to use a vpn with their service.

I think an incognito integration with morph would be cool because I think many users if morph are privacy aware.

I think they have an api which might be good to use.

I do find their fees a little high though at times and there are minimums on the trade amount, which makes sense but is sometimes less ideal if you want to trade in smaller amounts.

This integration would be cool to see.

True, but I was thinking if the pools are low in one area, and high in another you could use a full on coin swapping service to fix that. So not being able to do smaller trades wouldn’t be to much of an issue.
Since it seems simple enough to integrate, and it would be beneficial to the network. I think we should do it. Especially if Morph has Incognito on their site, it would bring a lot of traffic. Not to mention that currently swapping between pCoins is a little harder, and requires you to go through the PRV middleman.

Haha, I also thought of the same thing in May @oppo. We have so many XMR users in our network now. I guess that the outcome of the ‘XMR promo’, if it’s launched, would be very good. Just let us think more about it cc @annie

She takes charge of scaling the Node network of Incognito Chain.